Art in the Seminary Library

Art in the Seminary Library

“Nuns in a Narrow Alley” by Javitz 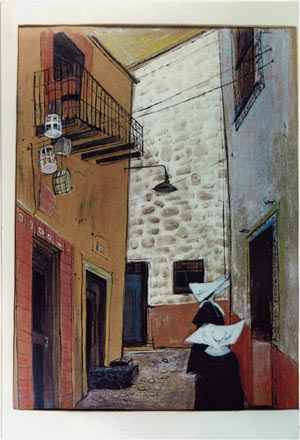 “Nuns in a Narrow Alley” is the title of a painting on loan by Father Porter to the seminary library. While the title of this painting is, without doubt, intentionally humorous, and there is, indeed, something amusing about the portrayal here of two nuns with large headdresses making there way through a narrow alley, nonetheless, this painting is meant to be a serious statement about a dedicated, a consecrated, Christian life. Indeed, it could be argued this painting is a visual interpretation of Jesus’ saying in Matthew 7.14, “narrow is the way that leads to life.”

This painting measures 24 x 18 inches and the medium is watercolor, ink and gouache. It bears the artist’s signature, “Javitz.” It probably dates from the 1950’s and is most probably by an American artist who once studied in Paris.

The two nuns depicted are readily identifiable because of their large, starched white linen headdress as “Daughters of Charity.” The Daughters of Charity were a congregation of Christian women with simple vows founded in 1633 by St. Vincent de Paul and his friend the Venerable Louise de Merillac (1591-1660). Vincent de Paul recruited young women from the French countryside to go to Paris and devote themselves to tending the physical and spiritual needs of poor sick people.

At first these girls dressed so as to blend in with the people they served, that is, they dressed as did the peasant women in the poorest neighborhoods of Paris, a gray dress with wide sleeves and a long gray apron with a small linen cap. But soon this religious movement began to attract many young girls from the Ile-de-France district just outside Paris. And they brought with them their own distinctive headdress. The Ile-de-France (literally, “isle of France”) district got its name not because it is literally an island, rather because its location between four rivers suggested an island. Though today this part of France is a heavily urbanized suburb of Paris, in Vincent de Paul’s time, it was a rich farming area where the women wore a large white headdress designed to shade them from the sun. This headdress came to be employed to mark out the professed religious character of these women from the country when in 1695 by legislation the Daughters of Charity mandated it as the distinctive headdress of the order.

However, there are several elements in this painting that make it clear the scene in this painting is no historical period piece rather it illustrates the following of this Vincentian religious ideal in modern times. For example, the electrical street lamp is a clear indication that this is a back alley in modern Paris. The procession of the nuns in single file suggests their journey is not casual, it is a well defined mission. Indeed, it is the conscientious following of an ideal. It is a pastoral visit, a journey dictated by their conscientious following of their religious rule. The tall stone walls, the shuttered windows and closed doors, the empty flowerpots, the empty baskets and birdcages all work to suggest the area of their mission, the hard, cramped, barren life of the inhabitants of this neighborhood. But the most intriguing suggestion of the meaning of this painting comes from the history of modern French art. For a student of that history would immediately recognize that stylistically and compositionally, this painting owes something to the work of Maruice Utrillo (1883-1955).

Utrillo, a French painter of Spanish descent, distinguished himself as principally a painter of empty, shuttered, melancholic Parisian streetscapes. He also employed flat colors in black contours such as we see in this “Nuns in a Narrow Alley.” It could be that Javitz studied in Paris for a while and was able to see much of Utrillo’s work firsthand. But even if he was influenced by Utrillo’s style, Javitz uses it to create another effect. While Utrillo painted the fashionable Montmatre district, and used his style to suggest the early hours and vapid life of Parisian society, high society or bohemian Paris, not yet risen from its night of revelry, Javitz uses the same techniques to suggest the cold, hard world of Parisian back alleys, the cramped, barren lives of the poor, the challenging mission field of such dedicated Christian women, making it clear these dedicated Christian women, in imitation of Christ’s solicitude for the sick and the poor, eschew the broad boulevards of Paris to walk the narrow confines of the poor.
Notes by Rev. Lawrence B. Porter, Associate Professor, Dogmatic Theology