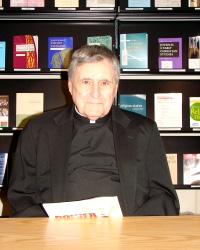 At the dedication of the Msgr. James C.  Turro Library on October 28, 2007, the current Library     Director, the Rev. Lawrence B. Porter stated:

Monsignor James Turro has had a paramount role in the history of this seminary library.  Among the five priests who in the 150-year history of this library have held the title of director, no one has held that title so long and amid so much trial and turmoil as did Monsignor Turro.  James Cyril Turro was director of this library for 45 dramatic years, from 1959 to 2004.

It is indeed fitting that the Seminary Library be named after the priest and scholar who has presided over it for nearly a third of its history, contributing so much to its development.  Originally from Jersey City, James Turro attended St. Paul of the Cross Grammar School and St. Peter’s Prep.  From there he went on to complete his bachelor’s degree in classical languages and then spent four years studying theology at Immaculate Conception Seminary, located at that time in Mahwah.  It was then that he was first introduced to the small, but growing, library to which he would devote such time and care during the following decades.  Father James Turro was ordained on May 22, 1948 in St. Patrick’s Pro-Cathedral in Newark, as Sacred Heart Cathedral was still in the process of being completed.

Following his ordination, Father Turro was sent to the Catholic University of America, from which he received a licentiate in theology.  Thereafter, he went on to Rome to study at the Pontifical Biblical Institute.  As the American graduate house in Rome was being renovated following the Second World War, Father Turro lived at the Anima, one of the German colleges in the city, developing his life-long love for the German language.  Returning to the United States, Father Turro began teaching at Immaculate Conception Seminary, where he would continue for more than half a century.  In 1959 he also commenced as director of the Seminary Library.  He completed a full inventory of the library’s contents and developed a far-reaching development policy to ensure that professors and students would have available the most comprehensive collection possible.

While his time was taken up with teaching and working at the library, Father Turro has always had a deeply pastoral heart.  Beginning by serving the parishioners of Holy Trinity Church in Hackensack, Father Turro went on to be a weekend assistant priest, celebrating Mass and the Sacraments at Our Lady of Mercy in Park Ridge, where he has remained so, for more than 50 years.  His homilies, both within the parish and at the seminary are renowned for their concision and their deep insight.  Shortly after arriving at the seminary, Father Turro also began his ministry as a retreat master, providing spiritual guidance to thousands of priests, religious men and women, and laity.  He has also led numerous pilgrimages to the Holy Land, Greece, and Turkey.  Monsignor Turro continues to be a much sought-after international speaker.

Always “a priests’ priest,” Father Turro gave himself whole-heartedly to his many responsibilities at Immaculate Conception Seminary.  A gifted lecturer, his classes were always popular, while many students also asked him to serve as their spiritual director and confessor.  Especially in the turbulent times following the Second Vatican Council, seminarians found in their Scripture professor and library director a serene witness to priestly integrity and joy.

Father Turro combined the highest qualities of thorough scholarship with an abiding love of God’s Word.  His articles in the Jerome Biblical Commentary, articles, and reviews of scholarly works, are models of synthetic learning, careful judgment, and felicitous expression.  Much of his technical work Father Turro has been able to popularize in numerous articles, books, columns in the Catholic Advocate, and parish talks.  Today, his monthly column “Your Word is a Lamp” is one of the most popular sections to Magnificat magazine.

Always generous in the teaching of Sacred Scripture, Father Turro has served as a visiting professor at Fordham University, Fairfield University, LaSalle University, St. John’s University, and Immaculata College.  For many decades Father Turro has taught, not only at Immaculate Conception Seminary in the Archdiocese of Newark, but at St. Joseph’s Seminary, Dunwoodie, St. Charles Borromeo Seminary, Overbrook, and at Holy Apostles Seminary in Cromwell.  He remains today an active instructor at these last three seminaries.  In the midst of all of these activities, Father Turro added an M.A. and Ph.D. to the pontifical degrees he already had and began his academic writing.  A selection of his works is listed below.  He has been active as a member of the Catholic Biblical Association, Society of Biblical Literature, the Mariological Society, and the Catholic Theological Association of America as well as an evaluator for the Middle States Accreditation Commission.  For many years, he served as a member of the international Anglican-Roman Catholic Dialogue.  Within the Archdiocese of Newark itself, Father Turro has worked on the editorial board of the Archdiocesan newspaper and served on the Presbyteral Council, Priest Personnel Board, and Continuing Education Committee.

In recognition for his service, Father Turro became Monsignor Turro as he was named a Prelate of Honor to His Holiness, Pope John Paul II in 1989.  Although he has retired from teaching at Immaculate Conception Seminary and serving as Director of the Library, Monsignor Turro remains a vital member of our community.  Never slowing down, he continues to carry on an impressive schedule of scholarly research, academic teaching, spiritual writing and speaking and serving at several weekend parishes.  In gratitude for all of his labors and priestly example, the Library of Immaculate Conception Seminary was renamed in his honor in 2007.